What Effect Do Mirrors Have On Animals? 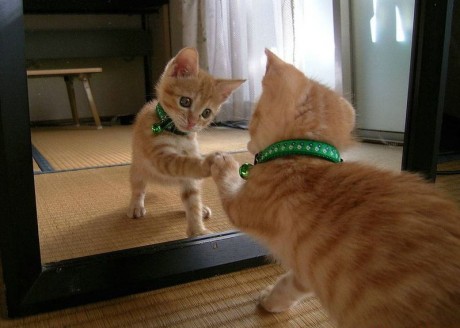 When horses are stabled alone, a small percentage of them are prone to a behaviour known as ‘weaving’. This is a series of actions such as the side to side swaying of their necks, forequarters and even their whole bodies. This behaviour is generally thought to be borne of the social frustration brought on by loneliness, and horse owners hate it for several reasons; they believe it causes fatigue, weight loss, and uneven muscle development – it also looks pretty disturbing.

For a long time, people hoped that they could stop this ‘weaving’ by installing metal bars in stables, to limit their horse’s movement, however, a study in 2002 of six horses known to be ‘weavers’, found that most of the installation of a mirror almost completely curtailed the behaviours synonymous with ‘weaving’. A later study went even further and discovered that a mirror would work just as well as the presence of another horse.

Over the years scientists have carried out a variety of studies on the effects mirrors have on the lives and behaviours of animals. Mirrors have been proven to improve the lives of numerous animals, from labs, farms, zoos and even pets.

Cows and sheep that are kept in isolation have been shown to present lower stress reactions when mirrors are around. Monkeys, both in groups and alone, display increases in social behaviours like grimaces, teeth chattering, lip smacking and threats when mirrors are placed around them. Mirrors in birdcages have been proven to reduce some birds’ fear and lab rabbits that are housed alone have been shown to be more active with the presence of mirrors.

The question, though, is why?

Animals have very different experiences with, and reactions to, mirrors when compared to humans. The predominant scientific opinion is that most species don’t recognise themselves in a mirror; that is to say, they don’t understand that their reflection isn’t another animal. The only known exceptions alongside humans are some varieties of great ape, dolphins, elephants and magpies – all of whom display very high levels of intelligence. A scientist by the name of Gordon Gallup invented the test that shows whether an animal recognises itself in a mirror. He marked the faces and ears of primates with dye and watched whether they used the mirror placed before them to investigate the spots. If they did, it revealed that the animal understood that it was their face they were seeing in the mirror. The experiment left Gallup with the opinion that most animals probably think that their reflection in the mirror is another animal.

The calming effect that mirrors have on some animals could come from the fact that their reflection is mimicking them. In 1970, Gallup and co-experimenter, Stuart Capper wrote, “The animal confronting its own reflection in a mirror has complete control over the behaviour of the image, and therefore the image is always attentive and ready to reciprocate when the animal is.”

It does, however, seem that some animals are intelligent enough to realise that there are differences between a real animal and their own reflection, even without necessarily recognising the reflection as themselves. In the mirror, animals have no smell, make no sound and also have no bodies; allfairly obvious to us, but a significant step for an animal.

Researchers have regularly used mirrors to test the aggression levels in fish. This is because fish are among the creatures that react with fear to their own reflections. A study published in May this year discovered that two of three cichlid species tested exhibited differing responses to their reflections than to another live fish. A further study discovered that differences in brain gene expression levels were dependent upon whether fish were meeting their reflection or another fish. The authors of the study believed that the fish were obviously recognising something unusual about the mirror image and believe that the differential brain response was reflective (excuse the pun) of a cognitive distinction being apparent.

Whatever it is that animals do conclude about their reflections, mirrors can sometimes lead to bizarre (and often amusing or unhelpful) behaviours. Many bird owners have noticed that their male birds are particularly enamoured with their reflections, often ‘mating’ with them and continually masturbating in front of mirrors around them. This ‘mate in the mirror’ can also stimulate females to lay eggs, which can be dangerous due to the depletion of calcium and thus brittle bones and health issues it can cause. Birds that bond in pairs, such as budgies, may bond with their reflection and snub their owners. Mice and other rodents tend to feed less around mirrors – indicating that mirrors may not be their ideal companions either. Reactions are diverse in dogs and cats. The first time they see a mirror can be particularly amusing, with the young animal trying to play with, run away from, or fight its reflection and generally ending up completely disorientated. In general, most dogs will eventually avoid or ignore their reflections, some do, however, continue to growl at their reflections for their whole lives.

Cats, though, often continue to be entertained by their reflections, performing and preening in front of mirrors, making it seem like they do learn to recognise themselves even after their initial failure to. Despite providing enjoyment and comfort, mirrors alone are obviously not enough to keep most social animals happy. The most poignant example of this is a study of young monkeys that were raised with only mirrors for company. Not unexpectedly, the monkeys demonstrated an unhappy mix of autoeroticism, self-clasping, stereotypy and bizarre posturing – behaviours known as isolation syndrome. The same would also be true for isolated cats, dogs, birds and other pets. If you’ve got one, you know; they accept no substitute for the person that you see in the mirror.

← Mirrors at the Terrace Suite with Inara Interiors
Mirrors throughout the ages…. →